VIDEO MAGAZINE ON THE BEST SERVICES 4 THE COMMUNITY OFFERED BY NON-PROFIT ORGANIZATIONS COMMITTED TO SOCIAL CHANGE IN GREATER CHICAGO. A PROJECT OF www.media4community.org

My days at ICRE-R, Illinois Center for Rehabilitation and Education at Roosevelt

We all remember the moment when we were ready to leave the nest, and experience the world outside our bedroom walls. It’s been five years for me, and that day is still as clear as the blue sky in my mind! I remember thinking “today’s the first day of the rest of my life: everything changes now”. I can still feel the excitement as the family pulled out of the driveway: I was grinning from ear to ear! When we finally pulled up to the building we were heading to I almost jumped out of the car! While walking through the halls I remember thinking “oh my goodness, this isn’t just an idea anymore, it’s real!” The idea that I was not living at home anymore hadn’t sunk in yet.

It wasn’t until  after they left and I was called to the gym that it must have hit because I experienced something beyond my control: I kind of  freaked out a little… the room spun, I couldn’t see or hear very well. Bobby was the only one in the room that I knew and luckily he was there. He got the nurse, and then everything was okay. It took me a while to come out of my dorm room but, when I finally did I was like “what the heck, I’m sick of being alone in this room”. The next thing I knew I was riding up to someone in my wheelchair and asking her “Hey, do you want to watch a movie?” From that that day on I was friends with Ashley!

It didn’t take long for Ashley and me to trust each other. We spent more time together helping each other help others… than helping ourselves! That’s when weekends became our favorite part of the week. “why?”… you asked? Because we could now have some girl time, we didn’t have to worry about 9am to4pm classes and other responsibilities. One night I was curious to know what symbol was on Ashley’s necklace. She said,” It’s a diver down flag”. Then she showed me a video: I was fascinated and wanted to try. A few days later she introduced me to Ron, ‘the fun guy’. He felt when we needed to come unglued from our wheelchairs, he’d just whisper ”They’re coming”, and we knew what he meant: FREEDOM! 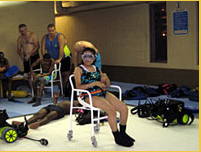 Diving was the one sport that made us feel equal to any other person in the world, and let us hear “yes, you can!” Six months of pool, book lessons, and much more hard work that paid off in the summer of 2009 when I got my SCUBA Certification in Key West, Florida! I will never forget the feeling I had on that dive… The ocean colors and creatures were like nothing I imagined: everything was so clear and beautiful, I almost felt like “this can’t be real, I’m dreaming!” After about forty minutes of ‘playing’ it was time to get back on the boat. Once back up there, the first words out of my mouth were “there’s fish down there!” Everyone turned to me and laughed saying ”well, of course there is!” As the week  went on I had more amazing things happen that are as clear as the ocean floor in my memory… but my favorite was our last night when my Certification was complete. We were all sitting at dinner in a line and when my turn was coming Jim skipped right over me and  I couldn’t figure out why. Little did I realize Ashley had asked him to recognize me last because she had something for me, the same necklace she had on her neck: the diver’s flag, which I still have and treasure today! 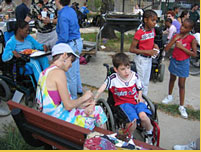 Ron and Ashley were just the beginning of life at ICRE-R, which is a facility for young adults with physical disabilities who want to learn how to live and work successfully not always having to depend on others. life at ICRE-R allowed to feel comfortable in a place where I could  just be myself and still get the  job done! Cerebral Palsy – a brain injury I’ve had since birth – isn’t easy, but being at ICRE-R made dealing with it easier… and day by day things became ten times better than they ever were before! Even now – as I’m sitting here writing to all you C4C readers – I afeel I owe thanks to all the staff at ICRE-R, and especially to: Ms. Choinire, Strz, Ron, and Mr. Geredine.

Ms. Choinire was – and I’m sure still is – the type of lady you feel intimidated by the first time you meet her. As I got to know her better it was nothing like that. But she’s for sure one person that made me strong! How? Well, where do I begin? Let me just say this: she is a teacher who does not hesitate to tell you when you are wrong. She is a person who wants the best for her students, and although she was on us at times, she would also say to someone else “You mess with my kids, you mess with me!” For me Strz was and still is the one staff I could open up  to about anything: classes, friends, work at Dreams for Kids, even family, or what might have happened after graduation. She always knew how to reassure me about all I could and would do successfully! She was so right! Five years later I’m living in my own house and have a job. I can’t forget about Ron and Mr. Geredine, who were the two reasons why I’m so attached to Dreams for Kids and why they are so special to me. Ron showed me the fun side of Tom Tuohy’s world (for those who might not know, Tom is Dreams for Kids‘ founder) and Mr. Geredine taught me the basics of business and the skills I would need to get a job one day, and that is probably part of  why I’m doing so well at my job today at Longhorn Steakhouse.  I wish I could repay all these positive influences: it is you guys who gave me the courage to do the impossible!  Oh, how I wish you all could see my life as of March 29, 2013 and how happy and healthy I am!

ICRE-R truly made me a strong independent woman!

One comment on “My days at ICRE-R, Illinois Center for Rehabilitation and Education at Roosevelt”